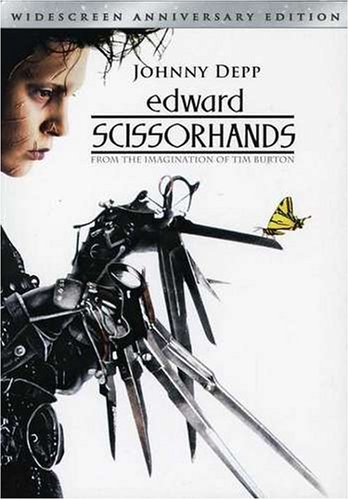 Edward Scissorhands stuns the audience with the virtually impossible feat of capturing the delicate flavor of a fable or fairy tale in a live-action movie. The story follows a young man named Edward (Johnny Depp), who was created by an inventor (Vincent Price, in one of his last roles) who died before he could give the poor creature a pair of human hands. Edward lives alone in a ruined Gothic castle that just happens to be perched above a pastel-colored suburb inhabited by bread-winning husbands and frustrated housewives straight out of the 1950’s. One day, Peg (Dianne Wiest), the local Avon lady, comes calling. Finding Edward alone, she kindly invites him to come home with her, where she hopes to help him with his pasty complexion and those nasty nicks he’s given himself with his razor-sharp fingers. Soon Edward’s skill with topiary sculpture and hair design make him popular in the neighborhood–but the mood turns just as swiftly against the outsider when he starts to feel his own desires, particularly for Peg’s daughter Kim (Winona Ryder). Most of director Tim Burton’s movies (such as Pee Wee’s Big Adventure, Beetlejuice, Batman) are visual spectacles with elements of fantasy, but Edward Scissorhands is more tender and personal than the others. Edward’s wild black hair is much like Burton’s, suggesting that the character represents the director’s own feelings of estrangement and co-option. Johnny Depp, making his first successful leap from TV to film, captures Edward’s childlike vulnerability even while his physical posture evokes horror icons like the vampire in Nosferatu and the sleepwalker in The Cabinet of Dr. Caligari. Classic horror films, at their heart, feel a deep sympathy for the monsters they portray; simply and affectingly, Edward Scissorhands lays that heart bare.