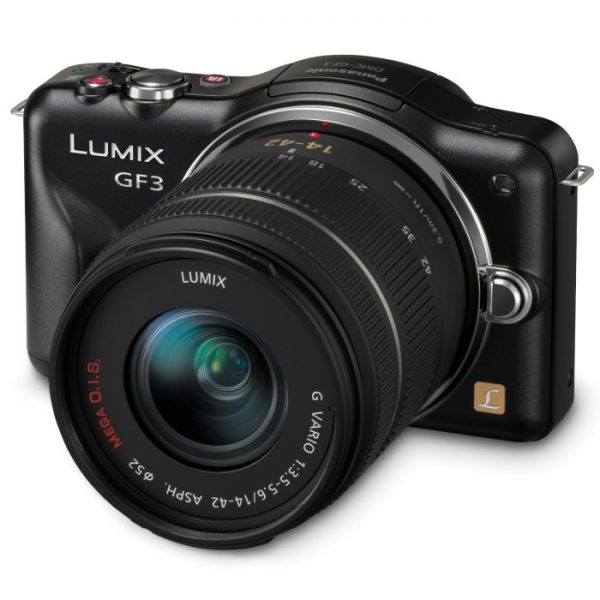 The Panasonic LUMIX DMC-GF3 is a point and shoot camera with all the features of an expensive bulky DSLR. Allowing for interchangeable camera lenses, the Lumix GF3 12 MP Compact System Camera is about the size of a smartphone and is one of the most user friendly cameras on the market. How did the

Panasonic make this camera so small and light? You see, due to progress in the new mirror free camera technology and DSLR format sensors, which are more compatible with the MFT system lenses the Panasonic Lumix GF3 12 MP Compact System Camera and 14-42mm Zoom Lens is able to be offered in a small, light and compact size which is not seen in traditional DSLR cameras.

Included is image stabilization, large DSLR sized 12.1MP sensor and advanced image processing technology. A dedicated video button allows you to switch to video capture quickly without having to fumble around with modes. The Panasonic Lumix GF3 12 MP Camera includes a large 3 inch LCD screen with the luxury of touch screen technology, much like you would see in a smartphone. With the touch screen you can control the menus as well as most of the shooting, focus, playback and effect controls. You can customize the menus in the Panasonic GF3 12 MP Compact System Camera with the easy to use drag and drop actions. Use the touch screen to lock onto a subject which enables the AF tracking in both still and video mode. Once locked in, you can shoot a spectacular photo, unlike any other point and shoot camera. The Panasonic Lumix GF3 12 MP Compact System Camera and 14-42mm Zoom Lens is the most versatile point and shoot camera with the functionality of a DSLR camera.