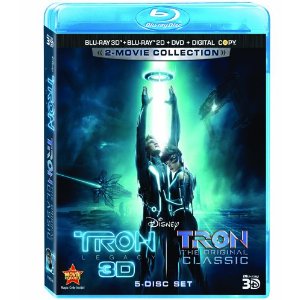 Tron: Legacy, a Disney high tech motion picture unlike any seen before. This amazing Tron 3D Combo Pack will take you into the digital world of Tron. With actors such as Jeff Bridges, Tron, the visually stimulating world of adventure will have you on the edge of your seat. Tron takes you through the digital world as Flynn sets out on an epic adventure to save his long lost father after finding clues left in the form of a secret signal. Helped by the female warrior Quorra, the father and son team navigate through the incredible cyber universe and embark on the age old battle of good versus evil. Tron: Legacy 5 Disc Combo Pack with complete never before seen bonus features will have you plunging deeper into the magical tech universe that is Tron. Included in this 5 disc combo pack is Blu-ray, 3D, 3D Blu-ray, DVD and Digital Copy. Don’t miss out on this amazing Tron: Legacy offer!