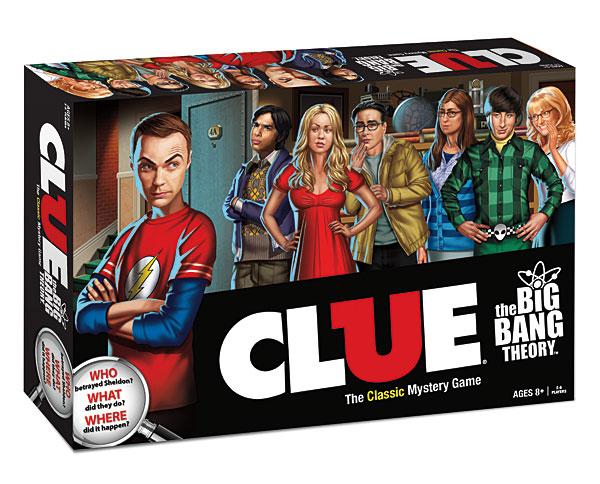 Someone has meddled with one of Sheldon’s sacred belongings and he isn’t taking it lightly. He’s sequestered 6 of his so-called “friends” and created a white board to analyze who did it, what heinous deed was done, and where the act of vengeance took place. Did Penny dog-ear the comic-book in the laundry room? Or did Howard dismantle the Shelbot in the stairwell? Assume the identity of one of Sheldon’s friends and/or suspects and try to figure out what really happened in Big Bang Theory Clue.

Big Bang Theory Clue is a blast. You roam the board as one of Sheldon’s suspects, trying to prove your innocence by proving someone else’s guilt! Travel around the board through familiar locations (like Sheldon and Leonard’s living room, Penny’s living room, the stairwell, the laundry room, and more) and fondle the custom “act of betrayal” tokens. Think you got what it takes to help Sheldon riddle it all out and put someone on his all-time enemy list? Then get yourself Big Bang Theory Clue and prove it!