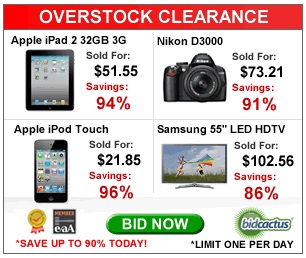 So today I’m going to get a little more personal with my post. Penny Auctions are often scrutinized and people cry scam. Do you know why people cry scam? It could be a few reasons. But the better half of all people who cry scam against companies like BidCactus just don’t understand what they’re doing. They’re going to BidCactus and thinking they are going to bid like they do on ebay. This is NOT the case. BidCactus requires you to employ strategy. If you don’t think before you bid, you’ll wind up spending a ton of money and run out of money before the auction ends.

Let’s go over the basics of Penny Auctions. On the surface it seems simple. Every bid makes the price go up 1 penny. However, every bid costs the bidder more than 1 penny. You purchase bids in bulk and often pay up to $1 per bid (BidCactus is currently $0.75 per bid). Now, when you bid, you’re paying for each bid you make (at $0.75 per bid) plus the sale price if you win. If you don’t win, you don’t recoup the $0.75 per bid that you spent to bid on the product.

Plan your attack. Watch auctions for a few weeks, see what price things tend to sell for. If an iPad typically goes for $49 you know not to bid until that mark.. be careful because you can blow your entire bank trying to get it. It only goes up 1 cent per bid, but cost you $0.75 each time you bid. Your best chance to get it is to bid only a few times, more than that and you’re in a bidding war – YOU DON’T WANT TO BE IN A BIDDING WAR! If you’re in a bidding war, that means the person on the other side is NOT experienced and is willing to spend tons of cash to try to win.

Bid a few times and then step away. It’s totally up to you how many times you want to bid. But you may learn quick 3 or 4 bids is plenty to recognize whether you’re in a bidding war or not.

If you don’t get this one, there will be another one. Don’t break the bank.

DON’T be the first one to bid or bid too soon! If you start at the beginning of the Auction and you bid every other bid, you’re looking at spending $750 on a product that sells for $20. So, DO THE MATH BEFORE YOU START BIDDING. Figure out how much you’re willing to pay for the item (not the sales price) – how much you’re willing to spend total including your bids. You’ve done research, watched auctions for a couple of weeks and found that iPads sell for an average of $50.00 and you’re willing to gamble a total of $25 in bid money, making your grand total of $75.00. So Bid money is $25 = 2500 cents / 75 cents = 33 bids (which means 33 bids only raises the price 33 cents!). You want to wait for the product to approach the average sale price, like $49.90 or so to start bidding. remember 10 bids is $7.50 so be careful!!!! Bid as few times as possible! Ideally you’d want to be the very last bidder and only have to bid once! That would be a perfect world. Not often the case, but sometimes that can happen (especially if you have 2 buffoons who just blew $400 a piece in a bidding war trying to get it and give up at the same time).

Lets recap what we have learned:

I hope I was able to help you understand a little bit about how Penny Auctions work.

This post is only my opinion about how to go about bidding at penny auction sites like BidCactus. Take this as an entertainment post. This is NOT advice on how to, how much, when to bid or how to conduct yourself during any auctions, online or off.

Sorry, I have to say this because there are so many cry babies who will go blow tons of cash and never get anything from these types of auctions: I do not suggest you use any online auction site anywhere, ever. Keep your money in your pocket.