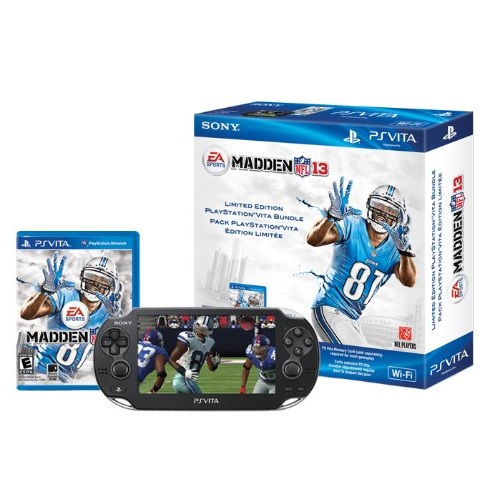 The Sony PlayStation Vita, nicknamed the NGP (Next Generation Portable) is the latest and greatest from Sony. Replacing the PSP hardware series, the PS Vita provides the familiar style of the PSP but is a serious improvement in every way. With powerful new features like the 5 inch OLED screen, dual touch pads on both the front and rear, dual cameras on the front and rear, dual analog sticks, SixAxis motion sensors and ThreeAxis electronic compass and built-in WiFi connectivity the PS Vita propels gameplay to a whole new generation.

Sony’s PlayStation Vita 3G + WiFi Bundle is the same system as the PlayStation Vita WiFi but includes the always-on 3G connectivity. Where ever you go, you can take your favorite gaming system and always be connected. Entering into the world of Next Generation Gaming, the PS Vita 3G/WiFi takes gaming to a whole new destination.

Madden NFL 13 PlayStation Vita Bundle. Delivering you the ultimate NFL experience in the handheld PlayStation Vita, the Madden NFL 13 bundle is packed with action, superior touch screen controls featuring new heights and depths of gameplay. All new commentary from Jim Nantz & Phil Simms announce the game as you battle with your friends online and challenge yourself to climb the leaderboard. You can also use the SixAxis Motion System to keep your players working hard to win the game. Madden NFL 13 for PlayStation Vita allows NFL fans like you to dazzle the home crowd and crush the opposing team!

1765 – America – Assassin’s Creed III Liberation for PlayStation Vita. The events heading towards the American Revolution are beginning to unfold. The Spanish Forces are planning to take control of Louisiana. There is only one person standing between them and victory, Aveline. Avaline is a deadly assassin with a barrage of weaponry and a mission to win freedom for her people and her land. Aveline will navigate the crowded streets of New Orleans, discover lost Mayan treasures in the bayou’s underwater layers and more. Are you ready for the violent fight for freedom? Destroy your enemies and claim your freedom for your fellow citizens and yourself with Assassin’s Creed III Liberation for PlayStation Vita and the newest chapter in the Assassin’s Creed saga. Use all of the PS Vita features to take control and deny the Spanish forces. Use amazing weapons like the poison dart blowpipe or dueling pistols as you execute slow-motion kills using the touch screen. The revolution is beginning, it’s time to fight. Memory Card Included.