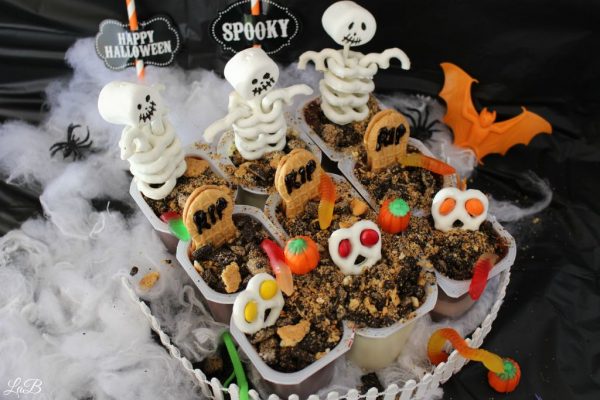 This shop has been compensated by Collective Bias and its advertiser. All opinions are mine alone. #SnackPackMixIns #CollectiveBias Who’s ready for Halloween? I know I am, so today we’re making a Snack Pack Zombie Graveyard by mixing in some delicious ingredients! OooOooo it’s spooky, and tasty too! The ghosts and skeletons will be crawling out from under the earth to roam the neighborhoods this Halloween! This pudding cup Snack Pack zombie graveyard with added goodies is a great way to serve up dessert to the kiddos at their Halloween Party or just as a surprise afternoon snack when they get home from school! Let’s jump right into the pudding and start building! For our pudding cup zombie graveyard we’ll begin by grabbing a stack of Super Snack Pack pudding cups from Walmart along with a bunch of your favorites like OREO Cookies, Nilla Wafers, Graham Crackers, Nutter Butters, Crunch ‘n Munch, Gummy Worms, White Chocolate Covered Pretzels, Marshmallows and all sorts of fun Halloween decorations. Of course you can add more or less to your graveyard, but these are the items I picked out especially for our Snack Pack pudding cup graveyard! We’ll line up the snack packs in rows of three. Mix in crushed up OREOs, Nilla Wafers, Honey Maid Graham crackers and Crunch ‘n Munch for the dirt. In some of the Snack Packs our zombie ghosts will be white pretzels with candy eyes, some Snack Pack pudding cups will have gravestones made from Nutter Butters with “R I P” inscribed on them, and some Snack Pack pudding cups will have white chocolate skeleton pretzels crawling out for Halloween. For a little added fun, we’ll have gummy worms crawling out from under the dirt, rolling fog drifting through the graveyard and a few other fun decorations we found at Walmart — oh — everyone will love these! So, let’s begin by laying out a black table cloth, some spooky spider web stuff for the fog and get ready to create our graveyard! Make zombies by adding chocolate covered candies as eyeballs to the white pretzels, like in the picture below. I put these ones in the Snack Pack pudding cups in the front row. Create skeletons out of white chocolate pretzels. Use pieces of marshmallow between the ‘ribs’ and a marshmallow for the head, threaded over a lollipop stick. Break off the top of two pretzels to create the arms. Use a food marker to make a fun face!

Scribe Nutter Butters with the letters “R I P” using black edible food gel and insert them in the second row. Assemble the pretzel skeletons for the back row. Assemble the graveyard and add some finishing touches.

While you’re at Walmart, grab some spiders, spooky bats and other fun decoration to finish off your graveyard creation! These snack packs are perfect for Halloween parties or just a fun weekend project! Other Halloween Goodies…you think I’d forget about all the other decorations and costumes and all that good stuff? Nope! You can’t have a party without awesome Halloween supplies. For this, we always head to Walmart. We try to do so as early in the season as we can, this way we get to choose from the biggest selection they have! So while you’re at Walmart picking up your Snack Pack Graveyard ingredients, don’t forget to snag the best costumes and decoration from the Halloween aisles at Walmart!

Coupon Alert! Check your Walmart for the coupon; Buy 14.3oz OREOs get $1 off Super Snack Pack Pudding! You’ll find this coupon in the aisle on a tear pad. How would you make your Snack Pack extra spoOoky ?